The James Reserve, like the rest of the reserves of the Natural Reserve System has the three basic mission of research, education, and public outreach. At the James, we fulfill the first two of these missions mainly by supporting the research and teaching activities of not only the University of California campuses but from a wide variety of campuses across the state of California and the nation (see What We Do).  Our activity in these areas is more behind the scenes by making sure visiting scientists and students have world class faculties in support of their activities (See James Reserve page).  It is in public outreach where the staff at the James become more directly involved. We at the James participate in a variety of outreach activities that provide information about the James and the natural world it represents.

Every year since 2009, people in Idyllwild set aside two days in July to celebrate one of our more spectacular wildflowers here on the San Jacintos, the Lemon Lily (Lilium parryi). The festival, started by Doug Yagaloff from Idyllwild, is meant to increase awareness of the lemon lily and promote its conservation, as populations on the “hill” have declined in recent years. Since its inception, the festival has been an important mid-summer attraction for locals as well as visitors. Normally most of the activity for the festival is centered at the Idyllwild Nature Center.  However, this year, in cooperation with the organizers of the festival, a field trip to the James was arranged to give visitors a chance to view lemon lilies “in the wild”.  Lemon lilies have always been at the James but, as with other areas, there do seem to be fewer today than before. However, there were enough around and in bloom, for the visitors to the James to see and enjoy. Also, under the leadership of Tom Chester, a local botanical enthusiast, the visitors not only got to see lemon lilies but Tom pointed out many of the other floral treasures that can be found at the James. One of the participants, Nick Shah, put together a slide show highlighting the tour and it can be seen here on his website. All in all, a very successful day, and a tour we hope will become an annual part of the Lemon Lily Festival.

Art at the James!

Our latest outreach efforts are of co-hosting with the Idyllwild Art Alliance a children’s science and art workshop at the James.  Science and art have always shared a com 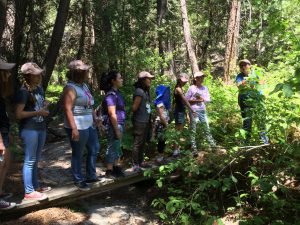 mon thread of creativity and inquisitiveness, a thread that can often be lost in this modern world. To renew and reinforce this commonality between what appears to be diverse disciplines for upcoming generations, we have joined with local artists to bring together science and art. On June 25, 2016, we hosted local middle and high school students to experience insights into the natural world and then have them express the things they learned through various artistic media. The day was a great success and all, students, scientists, and artists left with refreshed visions of the importance of science and art in our lives. To view more photos of the day’s events, click here. 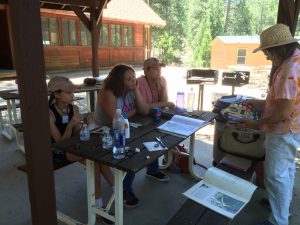 The James in the News

One of our outreach activities is to write a monthly article, Journal from the James, for the local Idyllwild newspaper, the Town Crier. In these contributions, we discuss a variety of natural history topics we feel would be informative to the local public. Below is the list of articles we have written so far, which will be updated as we add new ones.  Just click on the links and you will be able to read the articles.  We have also begun to write monthly articles for the locally published magazine Palms to Pines and contributions to this magazine can be found below.

January 14, 2016: Winter has arrived on the mountain – Article on the value of snow to wildlife

December 10, 2015: What’s wild in Idyllwild? Bobcats – Continuing the report on wildlife caught on camera, this time on bobcats

November 12, 2015: What good is a dead tree? – Article on the ecological value of dead trees

August 20, 2015: Sky Islands – Article on how mountains, worldwide, function much like islands in the sea.

May 14, 2015: Spring at the James – Article on the arrival of spring to the James Reserve

April 9, 2015:  What’s wild in Idyllwild:  Article on wildlife photographed by trail cameras in backyards of Idyllwild (see below).

February 12, 2015: A century of change in Idyllwild –  Article on the changes that have occurred in the forests around Idyllwild

December 18, 2014: Solving the mystery of the bird family tree – Looks at the ancestors of modern birds and how birds of today came about

November 13, 2014: Shepherds of Nature – article on the ecological role of mountain lions and other large predators

November 6, 2014: Welcome to the James– kickoff article about the James

September-October 2015: The view from Idyllwild: The natural world and life as art

Other outreach activities include presentations to the public on various natural history and ecological topics. To see the growing list of topics we have presented to the public click here. If you are interested in having a member of the Reserve staff give a presentation to your group or organization, please contact the Assistant Director, Mr. Andrea Campanella by phone (951-827-6836) or email (acampi@jamesreserve.edu).

A series of public talks named “What is the Value of a Tree?” were held on February  21-23, 2017 at three different locations (UC Riverside, Idyllwild, and UCR Palm Desert Center). To watch the full event at UC Riverside on February 21 click here.

One way we try to keep the public informed of what is happening at the James is to publish a quarterly newsletter where we provide information on what has happened over the previous few months.  To see the latest issue of our newsletter, just click here.  Past newsletters can be accessed here.  If you want to subscribe to receive an electronic version of the newsletter each time it comes out, you can subscribe by sending your email address to the Assistant Director: acampi@jamesreserve.edu.

Recently, we have begun a cooperative effort to document the kinds and abundance of vertebrate species that can be found in and around the local town of Idyllwild. We have solicited the cooperation of business and home owners to allow us to put motion sensitive cameras in their yards. These cameras have been documenting a wild variety of wildlife (as we reported in the April 9 article in the Town Crier (see above)). Many common species of birds and mammals, including robins, Steller’s jays, and squirrels have been photographed.  More elusive species such as bobcats and even a mountain lion have also appeared. The program is proving to be an excellent outreach tool to increase the awareness of the James Reserve to the local community. Ultimately, these photographs will provide the people of Idyllwild a glimpse into and greater appreciation of the natural world that surrounds them, which is a major goal of outreach activities. To view more photographs of wildlife from Idyllwild, click here.