Annual precipitation and temperature vary widely at the James Reserve, which is situated between two major climate systems, a Mediterranean influence from the west and a continental desert influence from the east. Depending on the El Niño Southern Oscillation (ENSO or El Niño for short), the weather can be extremely dry or wet. Added to this the global climate change we are currently experiencing and the climate at the 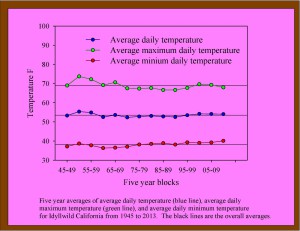 James becomes a roller coaster ride of temperature and precipitation!  Here we have summarized this up and down ride for the James based on over 60 years of weather data collected at the nearby Idyllwild Fire Station. We looked at what the average annual, maximum, and minimum  daily temperatures were doing over these 60 years and what these temperatures were for the middle of winter (January) and summer (August). We present the data averaged over 5 year time blocks to reduce the annual variation and look at long-term trends. 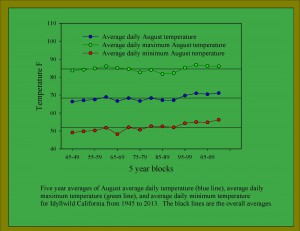 mum temperature seems to have risen slightly over the last 10 years or so.  Admittedly, averaging daily temperatures over a year and then again over 5 years may not mean much as we are lumping together cold winter days with hot summer ones.  If we look at what is happening in winter and summer by themselves, we might get a better feel for any changes that might be occurring.

Focusing on just the month of August (graph to the left), the average daily temperature has risen over the last 20 years. When we look at the average maximum temperature however, it is only slightly warmer at midday. In contrast, nightly temperatures have increased more than midday temperatures. In summer, it may not be getting too much hotter during the day but it does not cool off as much at night. This pattern is even more striking in the winter (graph at the bottom) where again, midday wintertime is only slightly warmer than the overall average but temperatures at night are substantially higher than they were before the 1970’s.  So just as many have suggested, it just doesn’t get as cold as it did in the ‘good old days.’

What this all means ecologically is the subject of many research efforts, including here at the James Reserve. The focus of research includes questions such as what impacts warmer winters have on plant and animal species and what particular climatic factors are responsible for generating the unique habitats found here in the San Jacinto Mountains. As the research continues, we will hopefully get a better idea of how global climate change will affect the ecosystems represented at the James Reserve.