2016 has arrived! A Celebration was had!

2016 marks the 50th year that the James Reserve has been a part of the University of California Natural Reserve System. It is time to 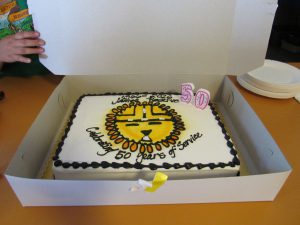 celebrate this milestone in the James’ history. On June 5th we held a 50th anniversary celebration at the James. The special celebration started out at 11:30 with meeting and greeting the more than 70 people who came to the James to participate in this special day.  Several of the original trailfinders that knew the James before it became a reserve (see Trailfinder History) traveled from afar to reminisce about the times they spend here with Harry and Grace James. The University of California Riverside was well represented with several administrators, including Chancellor Wilcox, and various faculty members from a variety of departments. Local persons from Idyllwild included the owners of various businesses in town and a special visit by the Idyllwild Nature Center “supernaturalists”, student interns participating in nature programs at the Center. The presence of the supernaturalists at our 50th anniversary was particularly poignant regarding both the Trailfinders and the Natural Reserves role in passing on knowledge of the natural world to younger generations. To honor that tradition, the students not only had an opportunity to listen to the research talks (see below) but to talk one-on-one with the researchers about their projects.  For more information on the Nature Center and the Naturalist program follow this link. 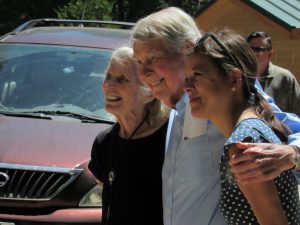 ith welcoming remarks by the Director of the James, Dr. Jennifer Gee. To honor the legacy of the James Reserve, named after Harry and Grace James, Jim Haley, a former Trailfinder 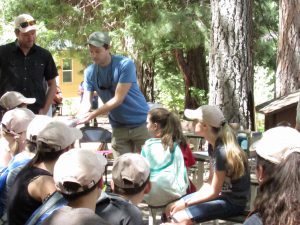 , gave a brief historical talk about the James when it was run as a boy’s camp by Harry and Grace. He also acknowledged and welcomed the various Trailfinders that made the effort to come and celebrate with us. To honor the role of the James Reserve to the University of California Riverside and the UC Natural Reserve System, Chancellor Kim Wilcox highlighted the value of having the James and other Natural Reserves as part of the UC campuses. Dr. Norm Ellstrand from the Botany Department of UCR then spoke on behalf of 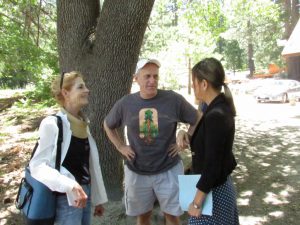 Dr. Roger Samuelson, the first director of the natural reserve system, about the importance of the Natural Reserves to the advancement of science and education in California and beyond. Following these talks, various researchers working at the James gave brief presentations, lightening talks, of their ongoing research. Details of their work can be found here. Afterwards, the general festivities of course included the cutting of the Anniversary cake, hikes around the nature trail, general socializing, an outdoor barbecue and live music. This special gathering was a relaxed and fun way to mark this historic event and begin the next 50 years! We thank all those who came to participate in this special day. To view more photos of the day, please follow this link.

If you want to learn more about what the James has been doing, please follow this link to our current and past newsletters. Also, if you are interested in contributing to the great work we do at the James, please follow the “Make a Gift” link to the right.